Ro is a sunken fire place that is used during the winter months (November through April).

The images bellow show how the placement of the ro would be in a Yo Jo Han. The square on the drawing is the ro. Each ro placement has a name, that is given on the top of the image. This name denotes where in proportion to the temae tatami the ro is placed.

In addition to the ones shown here, there is Gyakugatte, where the guest is on the left side of the host, the placement of the ro then becomes a mirror of the images shown bellow. Dairo is always gyakugatte. 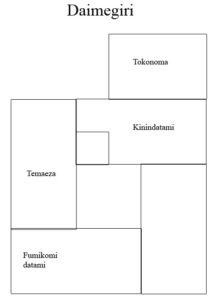 Daime giri is usually used in a room with Daime, but is shown here in a yo jo ha to make it easier to see the difference between the jo yo han giri and the daime giri. (The difference is how much space you have from where you are seated to the end of the temae tatami).